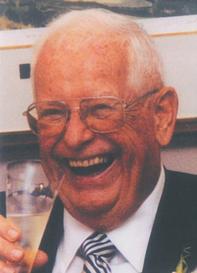 Tom Kaiser founded The Florida Packard Club in 1992, and was its caretaker until his passing in March of 2014.  Even before starting the Club, he hosted an Annual Packard Meet at his Sarasota property, which he dubbed, "Wit's End."  He hosted 31 years of Packard Meets in all.

Tom co-founded the Devereaux-Kaiser Car Show with his longtime friend, Maurice Devereaux, in 1970 and never missed the meet in 45 years.  It continues as the largest collector car show in Florida and remains a free event, at his direction.  The 2016 D-K Meet had about 2,000 cars!

A celebration of his life was held in Sarasota on Sunday, March 30th, and was attended by over 200 friends.  Many more would have liked to attend, but there were technical issues with his Packard Club email list, so most members could not be contacted in time for the event.

So many wonderful things could be written about our "Packard Gentleman," but I think his obituary offers a good summary, as written by his wife, Jacki:

Kaiser, Thomas M.
Feb. 27, 1929 - March 13, 2014
Thomas M. Kaiser, 85 of Sarasota, FL. Passed away March 13, 2014. He was born in Detroit, Mich. and later moved to Cleveland, Ohio. He was a resident of Sarasota for 56 years. He was Catholic. He served in the U S Army and was so proud to be an American. He owned Cars Of Distinction in Sarasota. He was a past President of The Manasota Bank. He was a board member of The Crosley Estate Foundation. He was a life member of the Elks and he was a Rotarian.  He was President of The Florida Packard Club and no one loved The Packards more than he did. He was a member of so many antique car clubs I couldn't begin to name them all. He was an originator of the annual Devereaux - Kaiser car show.
He was preceded in death by his beloved parents, William Sr. and Eugenia Kaiser, sister Jean Clagatt, nephew Mark Kaiser, niece Genie Kaiser.  He is survived by his adoring wife Jacki (Flynn), brother and best friend Bill and sister in law Peggy.  Stepson Damen Pappas, grandchildren Aidan and Sadie Pappas.  Nephew Eric Kaiser and his wife Val, grand niece Juli Kaiser, Ali Ernst and husband Jeremy who are about to present Uncle Tom with a new baby.
A perfect gentleman, a man's man, the most faithful friend you'll ever have and a true patriot.  We've lost one of our finest citizens.  He always had a smile on his face and had the best sense of humor.  I have lost the love of my life.
There will be a private family burial at The Sarasota National Cemetery with full Military Honors. A celebration of life will be held at a later date. [The celebration of life was held on 3/30/14 -ed.]
Donations in his honor may be made to The Southeastern Guide Dogs.

Tom Kaiser was a friend and inspiration to all who knew him, and is loved and missed by many.