This show was held for the first time in 2 years on May 1, 2022 to a nice turnout of approximately 400 cars. Above is our own Jacki Kaiser manning our Club tent as well as Norm Madsen displaying his 1915 Packard Twin Six.

Details on next year's show will be posted when they become available. 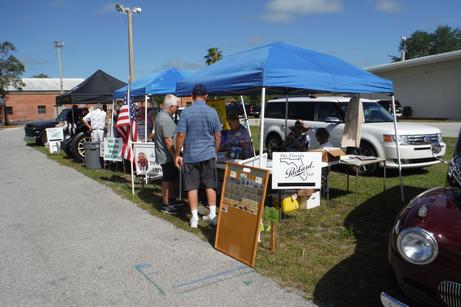 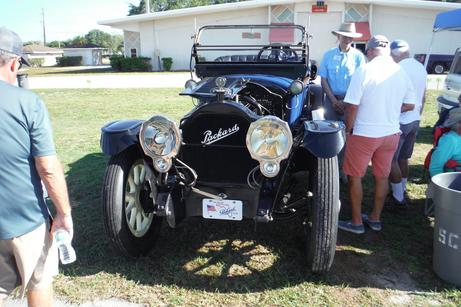 Our First Annual March Weekend Tour happened in 2019 in Brooksville. It was such a success, that plans for a Second Annual Tour were started immediately. Routes were laid out, a hotel booked, venues reserved and tour books prepared. Then came COVID. The governor announced that gatherings of 10 or more people should be avoided. We cancelled the 2020 Tour. For 2021, we reasoned that a Tour would not be successful, so none was planned. So, our “Second Annual” Tour happened this year—three years after the First Annual.

It was a big success. Fifty-one people signed up, registering 21 tour vehicles. After a few last minute cancellations, the final count was 47 people and 19 vehicles. This year, we invited the Florida Region of the Classic Car Club of America (CCCA) to join our tour. CCCA attendees (several of whom are also members of our club) drove mostly Packards, and there was a sprinkling of other interesting non-Packards as well. As always, everyone who did not bring a tour car had the opportunity to ride in one every day.

This year’s Tour lasted a full three days. The days played out as follows:

Friday included a drive to Williston for a visit to Cedar Lakes Woods & Gardens and lunch at the historic Ivy House restaurant. After lunch, everyone drove back to Ocala for an Ice Cream Social inside the 200+ vehicle NPD Car Collection. The CEO of NPD personally conducted the tour.

Saturday, a collector in Ocala gave us a tour of his outstanding collection of brass-era and 1920s cars. Then came a drive through horse country to lunch at The Yearling Restaurant in Cross Creek, followed by a tour of the nearby Marjorie Kinnan Rawlings State Park. This included the former Rawlings country home. Finally, tourists drove back to Ocala for a “Chinese Auction” in the host hotel.

Sunday was another full day, beginning with a drive to Silver Springs State Park. Tourists were treated to a glass bottom boat tour of the springs, which was followed by a picnic lunch beside the springs. Finally, everyone headed to the two Don Garlits Museums: The Museum of Drag Racing and Garlits’ Antique Car Museum.

Weather was outstanding for the Tour—cool nights and not-too-hot days. The only rain happened Friday during the night. Ocala experienced a rare tornado the weekend before our Tour, so some trees were down and some roofs wore blue tarps. But our weekend was perfect.

Plans are already in the works for a 2023 Tour, to be held in Tallahassee. Those attending can expect picturesque canopy roads, fun places to stop and great food offerings.